The content of this site is for educational use only and may not be reproduced in any form.

The following is an excerpt from the CD liner notes 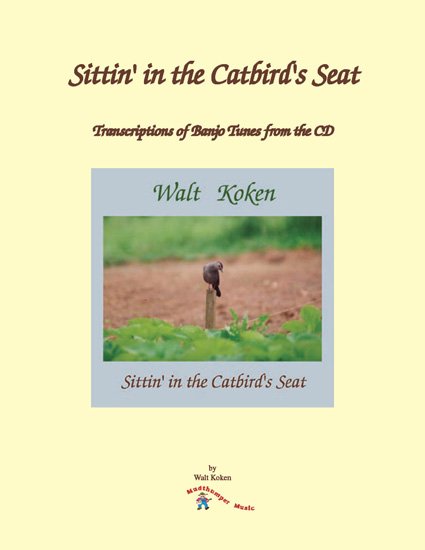 In 1966 I bought the Orpheum NO.4 banjo that I still play today from a fellow named Dave Portman, who owned a music store in Ithaca, New York. I ended up painting his house in payment for it. The banjo was made circa 1916, so it was about 50 years old then. At this point, I've owned it nearly half its life, and most of mine. We have crossed oceans and continents together, and it has stood me well. Not long after I got it, I had "Rick" Rickard, a friend and founder of Ovation Guitars refinish the neck, as lots of bare wood was showing from wear by a previous owner. In 2007 I had a reproduction neck made for it, as the frets were well worn and during winter dehydration it bowed to the point where it was barely playable. I love the sound of it. In fact, I'm partial to most banjo sounds, especially those of the organic type.

My dad bought me a tenor for ten bucks in April of 1959. It wasn't what I wanted, and it took a few months before my brother found me a five string, but meanwhile I availed myself of the local music store and was strumming chords and playing songs out of books. With the "new" five-string came Pete Seeger's book "How to Play the Five String Banjo". So I was frailing that year. I soon discovered Earl Scruggs and explored that vein for a while, but when I heard the old mountain music, a la Wade Ward, et al, I was hooked. About 1965 I was recruited to play in a very traditional seven-piece New Orleans style jazz band which had some really talented and dedicated players, some of which are nationally known today, so I borrowed a four-string, brushed up on my plectrum chords, and became an integral part of the rhythm section. I still played old time music with my friend, fiddler George Dorian, who loved southern music, but also had made several forays to Nova Scotia, both with and without me, and we loved that music too.

George died in an auto accident in 1969. That's when I took up the fiddle, as I knew of no one who played the tunes the way we had played them. That led to the formation of the Highwoods Stringband in 1972, and my banjo playing was reduced to my spare time, for the most part. Long after Highwoods, in the early 1990's, I began to develop some tunes and techniques, a combination of all the musical forms I had played on the banjo over the years, and I began to realize that development of the five-string was somewhat musically retarded. The minstrel style, documented in the mid 1800's had been replaced almost universally by a more drone-sounding and chordless Round Peak style, and bluegrass style was either shameless imitation of the "Big Three" (Scruggs, Stanley, and Reno), or was bluegrass-ized jazz, which, with a drone/thumb string, didn't always work so well with so many chord progressions. Since bluegrass is not Public Domain oriented, it seems that most innovation has come there (Keith, Fleck, Trishka, & Co.), but often doesn't escape bluegrass inflection by way of instrument style/sound, metal fingerpicks, plastic heads, and twang. The "Classic" banjo community is likewise hard-wired, as they tolerate only the gut-string sound, and written music. Most banjo players these days are oriented toward learning by tablature, usually a computer generated form which is lacking in visual beauty, and often sense, if incorrect tunings are given, as seems to often be the case. We've all but forsaken the early banjo music from a hundred fifty years ago, written in standard music notation engravings. And so banjo music is looked at slightly askance, perhaps as being odd in one way or another by the general public, and pigeonholed into strict codes of conduct for each genre.

If you use the Slippery-Hill website, please consider donating to help pay for server costs and technical assistance. My mailing address is at the bottom of this page if you prefer to send a check. Your donations are tax deductible if sent in via the Brandywine Friends of Old Time Music.